Pinterest simultaneously inspires and discourages.  It inspires you to try new things, but discourages you when you realize that you have neither the skills nor the resources to achieve the picture perfect results of the idea you just pinned.

In spite of almost guaranteed failure, I decided to try my hand at a piece of "art".

I still had several large spaces on walls that needed some kind of art work.  I spotted this one on Pinterest and decided to give it a try.  I purchased the canvas from Michael's, using a 40% off coupon - $25.  I had previously purchased a whole bunch of little paint pots on clearance from Totem in the colours of our living room, $1/each.  The only other expenses were the Frog Tape painters tape and the white paint that I had to purchase, full-price, from Home Depot, $4.99. Mike had a lot of little foam paintbrushes for me to use. I spent roughly $50 on this project.

I painted the colours in various layers over the space of about a week.  Then I let it dry thoroughly. I spent one Saturday afternoon carefully taping the herringbone pattern while listening to "Serial" on NPR.  Unfortunately, even using the expensive Frog Tape wasn't enough to prevent some bleeding around the edges of the tape.  Thankfully, I have a very steady-handed husband who patiently touched up the worst of it.

I don't think it looks that bad. 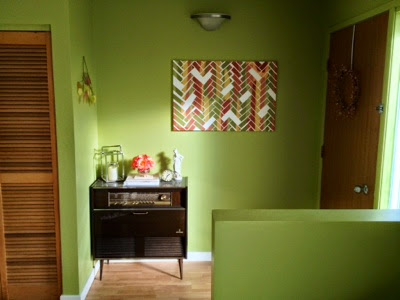 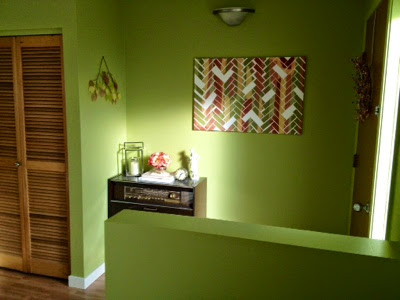 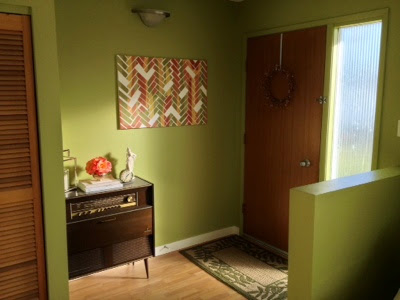 Posted by Alison Wonderland at 6:43 PM