I love to garden.  It's very calming to be outdoors, hands in the dirt.  To plant a seed and then later be able to eat the fruits (literally) of your labours is sweet indeed.

As much as I love it though, it doesn't seem to love me.  I try hard, so hard, to be a good gardener, but I think my thumb may be more black than green.

Case in point - this spring we realized that with our fence replacement behind schedule, there was no way we would get the backyard raised bed we had planned built in time for this growing season.  As one of our front flower beds was filled with the most hideous bushes known to mankind, I decided that it would be the perfect excuse to rip them out and plant a small vegetable garden there instead.  Unfortunately, by the time I got the bushes entirely removed, and my neighbour graciously rototilled it for me, I was already two weeks behind the generally recognized planting weekend of May Long.  Then we got that unrelenting rain and cool days and nights.  The sprouts were slow to come up and then most of the bean's leaves had rotted away from damp.  The spinach, which normally will volunteer itself anywhere a seed falls, had only two sprouts, TWO!

I'm thinking of blaming some of it on ants as well.  The bed was infested with small red ants making hills everywhere, but especially along the stems of the beans.  I ended up spreading diatomaceous earth over most of the dirt to kill the ants and replanting the sad, spindly beans.  Of course now they are over a month behind and I'm wondering if we'll even be able to harvest a single bean from them.

I was very excited about the basil plant I had purchased and planted in a pot in my backyard.  I had dreams of batches of pesto so large that I would have to can the excess! However, after only a week I noticed the leaves were turning yellow and brown and falling off of the plant.  I couldn't figure out the problem, I hadn't been overwatering it (basil likes dry soil).  Well, I might not have been overwatering, but apparently my husband was watering them every time he used the hose, and my 6 year old was watering them multiple times a day with her water gun. I cut the plant back, planted some basil seeds I had in the garage and am now waiting for the sprouts to grow into something usable.

I currently have only two successes.  I have a rather beautiful yellow pear tomato plant in a large terra cotta pot in my backyard that has many flowers and has already set quite a bit of fruit. 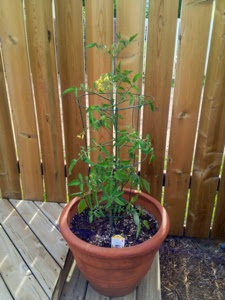 I have also had some good luck (so far) with a rhubarb that I planted in one of my front flower beds.  I know that a lot of gardeners in our area lost a significant number of their perennials this year. I lost 4 in one bed alone, so decided to use the spot that 3 of them had been in for a rhubarb plant.  I'm trying to incorporate more edibles into my yard and this was my chance. Rhubarb doesn't like it's roots disturbed, but it seems to be doing well so far in this partial-sun location.

I refuse to share a photo of my vegetable garden until it improves in appearance.  It's so embarrassing. That's the problem with front yard gardens, everyone can see how poorly your garden is doing. The neighbours probably wonder what on earth I am thinking. 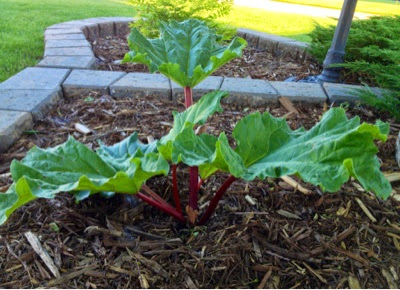 Posted by Alison Wonderland at 7:12 PM