How is your summer going?

It's hard to believe that it's more than half over.  At the beginning of July I looked ahead to the summer months envisioning playdates, day-trips and relaxing in the backyard with my girls.

The reality is that within days of school being over, I was already wondering why I was looking forward to the summer break as my children bickered and whined.  A couple of weeks into it and I was counting down to the start of September.  My neighbours probably know me as, "That woman that yells at her kids for yelling."

For some reason I always assume that our summers are going to be relaxed without scheduled events or firm plans.  I fail to remember that although the summer lacks routine, it doesn't lack for busyness.

The day after school was over my kids had their annual optometrist & dentist appointments, followed a couple of days later by their annual check-ups at the doctor.  The Monday after school was out was the start of 2 weeks of swimming lessons for my oldest daughter; she passed level 5!  Not bad for an 8 year old, I am so proud of her swimming skills!  During that time we also had a visit from some dear friends from Castor.  I really enjoyed showing my friend Leslie around Medicine Hat as she hadn't been here for many years.  My girls were thrilled to have a couple of days with their friends from Castor as well.

The week after that my 8 yr. old went off to 5 days at Southern Alberta Bible Camp with a cousin and a friend from church.  Although she wasn't so keen on her counsellor, she swears that she had a wonderful time and wants to go back again next year.  I used that time as an opportunity to do a massive cleaning and reorganizing of her room without her interference.  So far she hasn't missed any of the things I threw away!

That led straight into the Exhibition and Stampede.  We participated in the Downtown Chili Cook-off on the Saturday followed by the Horticultural Society Annual Garden Tour on Sunday.  The garden tour has inspired me to pull out a bush (Potentilla) and vine (Virginia Creeper) that I hate and replace them with a hydrangea, which I plan to do at the end of the summer.

We enjoyed Stampede week as well, spending a long hot afternoon at the Midway.  My oldest also went to the parade and rodeo with her Grandma (I had to stay home with my youngest from the parade as she got sick with a cough and cold). My 8 yr. old also entered some artwork into the Exhibition.  We were very disappointed that she only received honourable mentions, as we feel her skill level is beyond her years and far superior to most of the entries in her age category, but of course we are biased.  Below are her two entries:
﻿

﻿
﻿﻿﻿We also ended up buying a tent-trailer rather spur-of-the-moment during that week, which led to many days of cleaning and prepping as we look ahead to a big family camping trip. 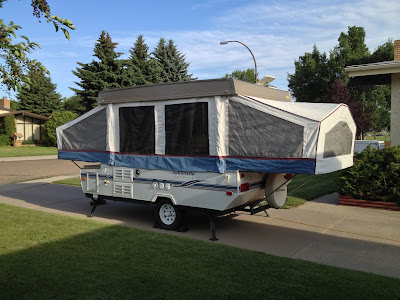 Of course we managed to cram in playdates at the waterpark, a couple of barbecues with friends, and more than a few trips out to my parent's farm where Mike tinkers with and rides his dirtbikes.

And now, suddenly, I feel like the summer is quickly coming to an end as the stores fill with school supplies and I look at the diminishing number of days left in August.  I realized this morning that if I was going to can pickles, it would have to be done this week, and who knows if salsa will even get done at all this summer, as I haven't been able to source a supply of home-grown Roma tomatoes.  We also never made it out to the beach at Elkwater at all this summer, in spite of good intentions.

Mike did complete a couple of big projects this summer, he replaced the baseboards in 2 of our bedrooms and they look fantastic, so much more "finished" than they did before.  He also replaced our back fence with boards that are taller and closer together to give us more privacy. Of course he also did a great job of keeping our yard looking park-like as well as repainting a couple of windows on our house and various other small repairs.

Only a few unscheduled days left this summer for our family. I wonder how many projects and outings I can fill them with?
Posted by Alison Wonderland at 4:01 PM