My insanely expensive grafted tomato was not as productive as I would have liked for how much I paid for it.  I had planned to make salsa with the Roma tomatoes that it grew, but after seeing the size of my harvest I settled on making homemade ketchup instead. 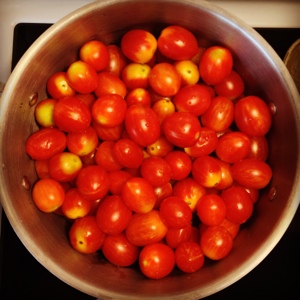 You might think it's a waste of time to make something that you can buy for such a reasonable price at the grocery store, and if you don't, you WILL think that after I tell you that the ketchup I make is only used for one thing at our house, the glaze for my upside-down meatloaf.  But what delicious meatloaf it is, with it's homemade ketchup and brown-sugar glaze.

I have a very specific kitchen tool for making applesauce and for removing the seeds and skins from tomatoes.  It's a Victorio Food Strainer & Sauce Maker.  I would normally use it to prep my tomatoes for ketchup or tomato sauce, but since I only had one pot worth of tomatoes, I decided to forgo this complicated-to-clean tool and just use my immersion blender and a strainer at the end to strain out the seeds and remnants of skin.

Simmer together over low heat until thick.  Puree in blender or with immersion blender after removing cloves and star anise.  Store in freezer.  Makes approximately 12 cups.

I would suggest putting the cloves into pouches made with cheesecloth and butcher's string, as you have to remove them before blending.  Otherwise you will be scooping them out and counting them to make sure you got them all.  Too many cloves will numb your mouth and make the ketchup inedible.  If you don't have fennel, just add a couple extra onions for bulk and maybe an extra star anise for more licorice flavour.  Since I decided to make this at 8 o'clock at night and didn't feel like running to the store for fennel, I just used more onions and it turned out fine.  I like to freeze mine in 3/4 cup amounts, enough for 1 meatloaf, in the 1 cup Bernardin Freezer containers available in the canning section of most stores. 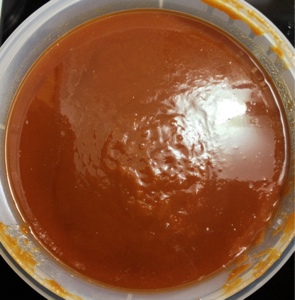 Posted by Alison Wonderland at 3:55 PM

Email ThisBlogThis!Share to TwitterShare to FacebookShare to Pinterest
Labels: Recipes