I'm always amazed when I discover something new about Medicine Hat, since it sometimes feels like I already know everything there is to know about this city.  It almost feels like a personal affront when I stumble across something new, "What? How did I not know about this?!", I say in shock.  I have such a proud and possessive love for this city and I'm always interested in the history of this place I call home.

This story is over 10 years old now, but it may be new to recent residents, and those of you who have lived here forever, like me, probably only vaguely remember it.  The story actually stuck with me not because of significant press coverage, but because of lack of it.  I always imagined that some high-up government official heard about it and said, "Shut it down", and so it was.

The story was this - a cold-war era hospital was found under the old Post Office when they were clearing it out for demolition prior to the construction of the Esplanade.  Here is the one and only news story about it (used with permission):

A remnant of the Cold War is sitting beneath the Canada Post building in downtown Medicine Hat.
Packed in dusty crates in the basement is 1960s-era medical equipment to be used in case of an emergency such as a nuclear war.
"Essentially what you've got there is a 200-bed hospital," said Medicine Hat's fire chief Garry Mauch, who recently found out about and toured the site.
"There's cots, there's radiology - X-ray equipment with portable generators - there's operating rooms with the lights and surgical equipment. And there's instructions for using the equipment."
The site is one of 19 across Alberta, and an unknown number across Canada, that date from the 1960s and are under the jurisdiction of Health Canada, he said.
The area consists of a corridor with storage rooms and a large open space.
It is not a fallout shelter or bunker and it does not have an air filtration system or supplies of food and other necessities, said Mauch.
The fire chief heard about the site and received a tour of the post office building with aldermen Harv Speers and Cathy Smith, as well as Howard Snodgrass, the manager of Medicine Hat Ambulance Service.
The group accessed the basement with a key belonging to the Palliser Health Authority.
Mauch serves as director of disaster services for the city. He contacted Health Canada after the tour because he was interested in the site in case of future disasters that would affect Medicine Hat Regional Hospital.
"I was told there was a training plan a number of years ago that they had a group going across the country and training local hospitals about the equipment. But that hasn't happened in anybody's memory," he said.
And after Mauch spoke to the Health Canada official, Palliser's key to the site was taken away.
"They said, under no circumstances are local authorities to have anything to do with this at all," said Mauch.
The city is currently trying to purchase the post office land for its downtown museum and performing arts centre project. In the city's plans, the building will be demolished.
"They said if that sort of situation arises, you contact us and we'll take care of it . . .We'll move to another location," said Mauch.
Speers said he would like to see some sort of preservation of the site as the arts centre work proceeds.
"It's an historical place," he said.
Donny White, director of the Medicine Hat Museum and Art Gallery, said he's excited about the shelter and is hoping to at least get a photo and video record of it before any changes are made.
"If it's from the original time period then that's a time capsule in my mind and I'd love to preserve it," he said.


Here are the only two photos I could scrounge up, courtesy of the Esplanade Archives: 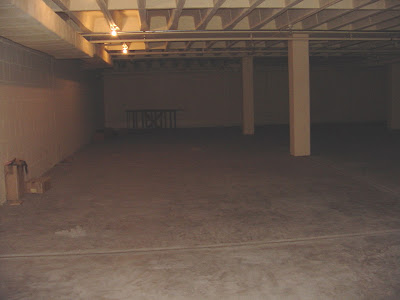 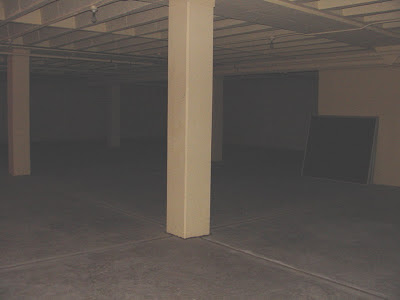 Following are excerpts from an email from Tim McShane, Curatorial Assistant at The Esplanade:
"I don’t think “bunker” would be the appropriate term—as far as I’m aware, it was a Civil Defense emergency hospital, and didn’t have the military overtones that “bunker” implies. It was about two stories underground, accessed through a stairwell off the 4th Avenue side of the building—I presumed the depth was protection against radiation/nuclear fallout, as I again presumed the big Civil Defense emergency on everyone’s mind in 1961 when the Post Office was built would be a nuclear bomb explosion.
Just about everything had been cleared out by the time (name removed) and I saw the place—photo DSC00028 shows a couple of cardboard boxes that held some Civil Defense forms—essentially “change of address” forms, to let family know that people had survived the civil emergency, and how they could be contacted (I think we brought back a number of these cards for the Archives). There was absolutely nothing else in the place—just six or seven big, empty concrete rooms and a few corridors joining them up. The attached images are the only ones I took—with the spaces involved, and low lighting, it just wasn’t possible to get good pictures, so I didn’t try beyond these two."
I was curious as to whether our particular "shelter" had been referenced anywhere else.  It was.

In September of 2008 an article appeared in The Vancouver Province about how hidden emergency supplies were inaccessible to the public due to municipal leaders being unaware of their existence and whereabouts when an emergency arose.  Here is the specific quote about Medicine Hat:

"It's Health Canada [that controls the National Emergency Stockpile System] and these turkeys don't want anybody to know where it is," Ontario Liberal Sen. Colin Kenny, chairman of the Senate Standing Committee on National Security and Defence, said yesterday.  "In Medicine Hat, the local authorities actually found it and the federal guys came in and moved it to hide it again. They said it was none of their business, it's the province's business and the feds do not talk to cities."

Apparently these stockpiles are not so secret that the government doesn't talk about them on occasion, such as on their website about the National Stockpile Emergency System.

You can also see a Federal review of emergency preparedness for Medicine Hat (it's a bit dated, mind you) on the Emergency Preparedness of Canada report to the Standing Senate Committee on National Security and Defence in 2008. Medicine Hat is in Volume 3.  The person preparing the report must have had a sense of humour, because the subtitle of the report is "How the fine arts of bafflegab and procrastination hobble the people who will be trying to save you when things get really bad... "

My question is then: Who knows where these stockpiles are and how will we access them in an emergency, if leading municipal officials don't know anything about them?

So there you have it, a tidbit of local history that you may not have known about; do with it as you will. I'll let you take what you like from this story: conspiracy theories, government cover-ups, etc. ;)


Many thanks to Angus Henderson, Tim McShane & Philip Pype for their help with gathering local information about this story.
Posted by Alison Wonderland at 10:20 AM