Cuisine type: I would classify the menu as Italian/Canadian

I was invited to join some friends for supper at the From Scratch Italian Bistro.  I had never been there before, and had heard mixed reviews of the place, so I was eager to give it a try.

First impressions:
To me it seems like an odd location to have a restaurant, and the outward appearance of the building gives the impression that it would be a lunch-counter style establishment, serving the local businesses on South Railway and Kingsway. However, I was pleasantly surprised by the decor when I entered.  It was warm and welcoming, much more upscale than I would have expected.  There was a stage at one end of the restaurant for live music, although there was none that night.  I did feel that the decor lacked cohesion however.  The lighting and decorative touches felt higher end, but the musical icon wall mural seemed like it belonged in a fifties diner; and the mismatched tables & chairs and menus printed on legal size paper and distributed on cheap utilitarian hardboard clipboards felt temporary and "make-do".

Parking - There is angle parking available alongside the building.

The Food
On the table were placed two small serving dishes that held a few large, stuffed olives and spicy peppers.  I checked quickly when they were first set down on the table and saw that there was one olive for each person at the table.  After that we were brought baskets of bread sticks, which I'm assuming were homemade, and bowls of oil and balsamic vinegar.  Again, there were as many breadsticks as there were people at the table. I was excited to try the bread, as I was extremely hungry by this time (I'll get to that in the Service section of this review), but was disappointed that it wasn't warmed. Attention to this small detail would have made a big difference, as would even a partial refill on the bread basket when it was empty.  To put it bluntly, they were parsimonious with the free starters, which would be excusable if the entrees were more reasonably priced, but considering the high entree cost, they could have been more generous. 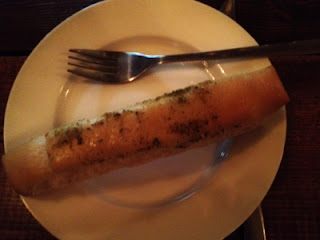 Typically, when eating out, I order things that I wouldn't/can't make for myself at home.  My family is not a huge fan of lemon flavoured foods, so I decided to order the lemon shrimp pasta with cream sauce (it had another, far fancier name on the menu, but I forgot to write it down, so you'll have to settle for what I've called it).  Firstly I'll say that the pasta was divine.  I've made my own pasta before and it can be a tricky business; getting the thickness right, drying it just enough before cooking, and not over-cooking it.  This fresh-made pasta was tender, but not mushy.  The shrimp were cooked perfectly as well, which is harder than you would think. Shrimp cooks so quickly that if you aren't paying attention, you'll be left with an end product that's dry, rubbery and tough. The only two faults I could find with this dish were it's lack of seasoning, and the fact that rather than using a microplane to zest the lemon, they must have used a large sized grater.  The pieces of lemon in the pasta sauce were too big and hard for how delicate the dish was. Using a large grater also meant that the pieces of lemon peel included pith, which is never palatable as pith is bitter and generally not used in cooking.  The lack of seasoning was easily remedied with salt and pepper, but I kept biting into lemon peel where there should only have been lemon zest.

I found the portion size to be more than adequate, and I ended up taking about a quarter of it home with me.  Some of my dinner companion's meals looked a bit skimpy, while others ended the night like me, with a take-home container.  I would suggest that you ask the server about the portion size when ordering, so as to not be surprised when your order arrives. 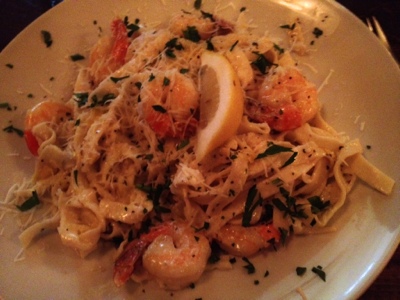 Price:
I found the prices high.  Perhaps if you don't cook at home very often and are looking for a meal that has been made "from scratch", you won't mind paying the higher prices.  The reality though is that I cook from scratch almost daily, so it's not a novelty to me.  My entree was $22, which seemed a bit overpriced, and it was even one of the less expensive options on the menu. If I were to choose a price that I felt was appropriate, I would say that $18 would have been closer to the mark for this entree.

Service:
Service is an area that could use some work.  When we were arrived, there were another two groups in the restaurant, one large, about 14-16 people, and one small, just two women and a baby. The women and baby left shortly after we arrived.  We were seated immediately, but then waited without service other than our initial drink order being brought, while the servers focused on serving the large party the rest of their meal and dessert which was prepared table-side.  It didn't seem like our service and meal preparation began in earnest until that party had left.  I would like to point out that we had a reservation, and undoubtedly, a group as large as the other one would have had a reservation as well, particularly on a Saturday night.  So if the issue was having enough hands in the kitchen, they should have known in advance and made sure that there were enough people available to prepare & serve in a timely manner.  Our reservation was for 6:30pm and we weren't served our meal until at least 8pm, possibly closer to 8:30pm.  So you can see why I was desperate for more breadsticks.  The service was good once our food arrived, but getting your food in a timely manner is probably most people's main concern when it comes to service.

Personally, I would give this restaurant a pass, as I found the service slow, and the food, while delicious, to be overpriced.

UPDATE: Typically I don't respond to negative comments on my blog, but it has come to my attention that I misquoted the price of the entree I reviewed and I wanted to make sure that I am as accurate and truthful as possible in all things that I talk about on here.  I distinctly remember leaving a tip at the table when we left, so I assumed that the price on my receipt was the entree cost + GST (I'm not so great at math).  However, I must have felt that the amount of tip that I left at the table wasn't sufficient (I don't often carry cash), so I must have added an additional tip when I paid at the till as well, hence the confusion on entree price (and no, the amount wouldn't have included drinks as I only had water to drink). My till receipt was for $22.80.  My sincerest apologies for any misrepresentation on the entree price, which is apparently actually $19.  However, I fully stand behind the rest of my review without apology.
Posted by Alison Wonderland at 10:25 AM