My Garden - The Aftermath

My garden was a bust this year.  I was so disappointed, as I had high hopes of a huge harvest.  But after tallying what I spent on it, versus what I got off of it, I realized that I would have been better off just buying my produce from the farmer's market. 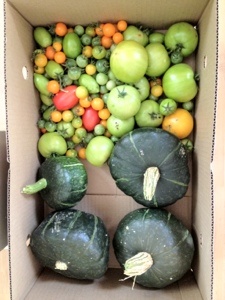 Here is a rough estimate of the cost:

Approximately what I got off of the garden:

2 meals of peas
3 meals of beans
1 meal of potatoes
8 tiny onions
4 small butternut squash
6 large freezer bags of carrots - this was my most successful crop
2 cucumbers - and they were horribly misshapen
Zucchini - they had crossed with a winter squash that was planted nearby and so they were seedy and had hard skins
A very small amount of tomatoes - some Sungold Cherry tomatoes and about 20 Roma's & regular tomatoes.
2 teeny tiny red peppers

The spinach bolted before I had a chance to pick any of it.  The cantaloupe, one of the watermelon, one zucchini, and two cucumbers I had planted all died.  The watermelon plant that survived was only just flowering this week when I pulled it out, as were the remaining cucumber plants.

I realize that I was not as attentive as I could/should have been this summer, but it still didn't account for the poor harvests I was getting off of my plants, particularly the tomato plants.  In Castor I planted these same tomatoes and had such enormous crops that in 2009 I made a double batch of salsa, a batch of green tomato chow, a double batch of ketchup and froze two large Tupperware containers of oven roasted tomatoes that I use in soups, sauces, scrambled eggs, sandwiches and almost anything I can think to put them in.

I was starting to think that it was all me, or really, lack of me, that was the root of the problem.  That was until one evening when I was weeding in the garden.  I stood up to stretch and turned around to find three deer standing 15 feet from me, happily grazing their way through the garden, knocking tomatoes and peppers off of plants as they went.  They just stared at me and then went back to their destruction.  I tried yelling at them and throwing some of the spoiled green tomatoes that were on the ground (that they had undoubtedly knocked off on a previous evening's foray).  They were completely nonplussed by my yelling and shovel waving.  One of them even came over to my plot, not 6 feet from me, to snack on my plants.  What can I say?! We have a significant amount of urban deer in Medicine Hat and there isn't anything we can do about it. So, inspite of my reservations about container gardening, I will be doing it in my fenced backyard next year, as there is no way that I could get a lesser crop in containers, than I did this year in the community garden.
Posted by Alison Wonderland at 2:28 PM