Why celebrating my daughter's birthday means so much to me. 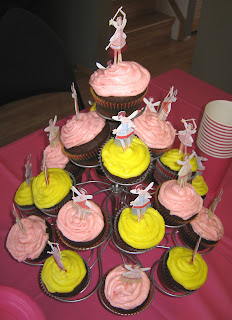 My baby turned 4 last Sunday.
I know I sound like every mother when I say that I can't believe that she's this old already.  Those of you who know me know that I still call her baby all the time.  And she will always be my baby, no matter how old she is or how tall she gets.

Life experience has taught many of us that the joys of life are that much sweeter when we've experienced the darkness of the lows, if we can get through them.

I've been in those dark places with her.  I knew when she was only four months old that something was wrong with her, that somehow she wasn't growing the way she should be.  It wasn't until her weight dropped through two curves on the growth chart that I could finally convince others what I had already known.  The wait for specialist's appointments, test results, and procedures felt like eternity, even though she was actually getting through the system fairly quickly (as fast as my constant phoning, harassing and questioning could get us).

I would wake in the night with my heart pounding in my chest and bile in my throat, terrified that she was going to die before they could figure out what was wrong with her.

The list of medical personnel she saw was long:
Is it any wonder that I am fanatical in my support of public healthcare?

When she was 15 months old she had a gastroscopy.  She's had chromosome and amino acid testing as well as being tested for specific disorders. She's had so many blood tests that one time we had to go back a week later because they couldn't take as much blood from her as they needed for the tests.  It goes without saying that she freaks out when she sees people in white coats.

I had to weigh her monthly for years and report her weight to the clinic in Edmonton.

She had severe gastroesophageal reflux disease.  She threw up violently more than 70 times a day from the time she was three weeks old. She was labelled "failure to thrive" and weighed only 16 lb. 13 oz on her first birthday.  She wouldn't eat solids till long after she was one and couldn't tolerate any texture at all.  She would choke and gag, and couldn't chew anything but soft foods.  It would take more than an hour to feed her a meal, which might consist of  half a cup of pureed lasagna.  She never put anything in her mouth of her own free will, not even toys or her hands. The OT and I had to work to teach her how to eat.  They decided that she had an "oral aversion" and that her overactive gag reflex, poor mouth coordination and strength, and inability to swallow solids, were developmental problems as a result of her excessive vomiting.  She took Prevacid for the reflux for a long time, and still uses it after having the stomach flu, as it throws her off so badly.

You know how they say that a kid will eat when they're hungry enough? That's actually not true.  Children will starve themselves if they have a negative association with food or eating.

Even now her mouth is weak and she chokes easily.  I have to make sure to only prepare her soft foods and someone always has to be with her when she eats.  She had two choking incidents last year, and one of them was bad enough that she wasn't able to breathe and I had to do the baby version of the Heimlich on her.  The other scared her so much that now she asks when I make her sandwiches if there's anything in it that will choke her.

Additionally, all the testing she had done revealed that she has IGA deficiency, which is why I'm super strict about hand washing and try to keep her away from sick people.

She takes a lot of supplements because her diet is very unbalanced since she doesn't like to eat, and she sees a speech therapist once a week since her speech is delayed from her mouth problems.  But really, after all we've been through, I think we got off lightly.  The last time I had to weigh her and call in her weight was on her third birthday, after she'd had a set-back.  She was 26 lb. 8 ¾ oz. Then I quit weighing her because I was too scared to know and there was nothing more I could do about anyway.  I finally weighed her again on her birthday this year and she was 31 ½ lbs!  According to the growth charts, that puts her at the 50th percentile!  A miracle for a girl who wasn't even ON the chart for a long, long time.  Her doctors think that she'll outgrow the silent reflux (it comes up but not out) by the time she's six, and that she'll overcome her pickiness and dislike of eating by age 10.  Now that she can talk she tells us frequently that her stomach hurts.

I've been accused of doting on her, spoiling her and letting her get away with bad behavior.  It's true, I do.  But after the fear of losing her, I think I'm entitled too.  Everyday with her is sweet.
Posted by Alison Wonderland at 9:42 AM