Web Round-Up: All the Rest

Here's the rest of the stuff that didn't fall under the previous two categories of funny photography or hilarious videos.

Pretty amazing waterproofing substance.  Their website also shows them coating electronics and pouring water over them.

I can't watch more than a minute or two of this video of the Vegan Black Metal Chef preparing Pad Thai, as it grates on my nerves, but it shows how people can combine their very disparate passions.

My 6 year old adores owls, and we've watched this video over and over.  I think that the little owl is a Burrowing Owl.  I love how it leans in for pets like a cat.

Wired had a great article on The 5 Best Toys of All Time that has been making the rounds.  I had one brother in particular that made good use of those toys.

An impressive infographic on where all the money in the world is and who has it.  It would appear that the family that owns Wal-Mart has most of it.  Here's one small section of it showing billionaire's share of the wealth: 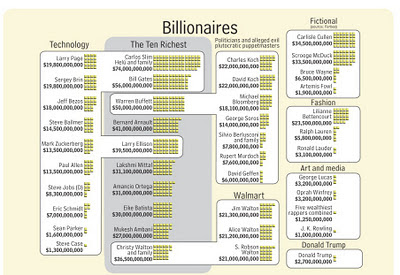 Check out the winners of the Zombie Safe House Competition.  Also, did you know that we have zombie ants in the Cypress Hills?  It's true.

Who's been leaving mysterious paper sculptures in libraries?

I want this little printer, even though I still don't have my iphone!

Did you know that a group of starlings are called a murmuration?  I didn't, until I saw this video.  Then I discovered that there are a lot of videos on YouTube of Starling murmurations.  Check them out when you have a minute.  They are the bird equivalent of schools of fish.

Posted by Alison Wonderland at 1:42 PM