Is It Too Late To Change My Child's Name?

I know that baby names can be very contentious:  weird names, bizarre spellings, the ever-present fear that someone will steal your baby name if you tell them prior to actually birthing and naming your child.  But something that a lot of people don't think about is regret, as in, "Oh my goodness, what have we done, we totally picked the wrong name for our child!" 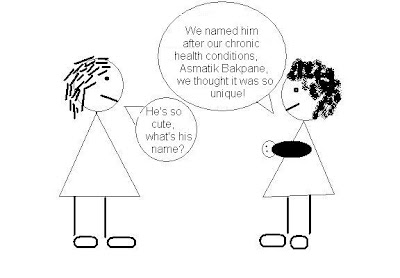 Now naming your child has become even more significant as researchers and academics have correlated life expectancy and ability to get job interviews with your name.

As with most parents, we had our baby names pretty well settled on by the time we took the trip to the hospital to have the baby.  It helped that we knew the genders of our babies and that I had been compiling a list of girl's names since I had entered my child-bearing years!

Our oldest daughter has two middle names, the middle names of my sister and my husband's sister.  So when it came time to name our second daughter, I naturally assumed that we would give her two middle names as well.  I had been calling her by that name in my mind since the ultrasound had verified that she was, as I had hoped, a girl.  But while filling out forms at the hospital, and asking my husband for verification that this was indeed what we were planning on naming her, he told me that her two middle names, "were too much", and he wanted to just give her one middle name.  I was a bit disappointed, but in a non-argumentative state of new baby euphoria, and lack of sleep (I was already sleep deprived from my almost 3 year old), I just filled in one middle name in the form.

However, as the weeks and months went by, and I proudly showed her off to family and friends, I realized that I was having some regret about her name.  I considered changing it then, but it was at the time that the Twilight series was a big deal, and although I had not yet read them, I discovered that the unused middle name was a character from the books, Esmè.  I was worried that people might think that I was naming our beloved child after a fictional character from a poorly written young adult series.

So I decided to let it go, only I haven't been able too.  I know that it would require a fair bit of paperwork and some expense to change her name legally, as well as the hassle of getting a new birth certificate, social insurance number, health care card, etc.  And I also realize that changing your child's name should happen sooner than later (is 3 years old too old?)   But I wonder if I don't do it now, will I be looking back in 10-15 years still regretting my decision?  To top it off, I asked my husband about it a while ago and he doesn't even remember saying anything about it in the hospital.  He told me that I should have given her both middle names if I wanted too!
Posted by Alison Wonderland at 9:06 AM

Email ThisBlogThis!Share to TwitterShare to FacebookShare to Pinterest
Labels: Parenting