I've already told you what I thought about the conference I was at, but I haven't shared the rest of my weekend in Vancouver.

I had such an amazing time.  I've previously been to Vancouver in the summer and winter, but recommend spring as the very best time to visit.  Everything was lush and blooming.  I couldn't get over the plants that were flowering with such intensity everywhere you looked.  The sort of plants that we could only dream of growing on the prairies, such as bougainvillea and hibiscus, as well as palm trees and this totally freaky tree which I've discovered is a "Monkey Puzzle" tree.  There were huge flowerbeds of tulips, and streets lined with pink cherry blossom trees. On the UBC campus there was a Japanese Maple that had creamy peachy-pink leaves just beginning to uncurl on the branches.  It was both inspiring and depressing.  Inspiring for the obvious reasons, and depressing because I knew I was returning to a very monotone landscape.

I found a pink bush that I would love to grow in my yard, not pink flowers, but an actual pink BUSH!

After uneventful flights from Medicine Hat to Calgary, and then Calgary to Vancouver, my friend Jeanette and I went out for supper to Belgian Fries on Commercial Drive, where I had sweet potato poutine and a burger.  Belgian Fries is supposed to have the best poutine outside of Quebec, but I was pretty disappointed with the fact that their gravy was vegetarian, and they were a little skimpy on the cheese curds.  There wasn't a beef gravy option at all!  Would you question my discerning palate if I told you that I like the gravy, curd and fry ratio better at Burger King?

Friday and Saturday we spent on the UBC campus at the conference.  The conference planners hosted a party on Friday night at The Academic, which had great food and gave us the opportunity to mingle and socialize with the other attendees.  After the conference wrapped up on Saturday we went on a driving tour of downtown Vancouver and did a little shopping at Gourmet Warehouse before heading out for supper.

We ate at Palki Restaurant on Commercial Drive while I caught up with another old friend.  Indian is my favourite cuisine, I could seriously eat butter chicken everyday!  I'm so happy to see that we finally have an Indian restaurant here in the Hat again, I'm going to have to check it out soon and see how it measures up.

Sunday was a sleep-in day and then we headed off for fantastic eggs benedict at the Roundel Cafe on Hastings St. 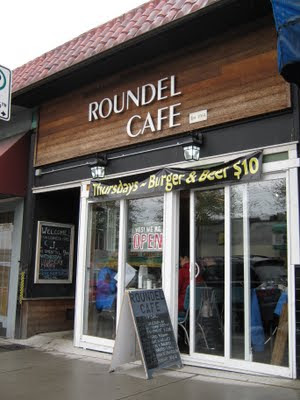 We followed this up with coffee on the patio at the Starbucks in Gastown, which is always good for people watching, especially the tourists at the steam clock. 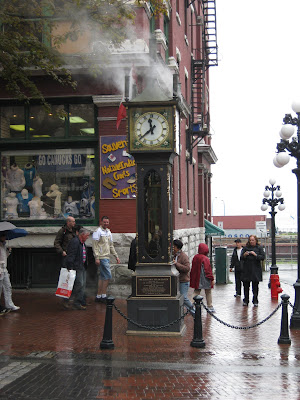 On Sunday night Jeanette made me the most fabulous pasta supper.  She had just come home from a long vacation in Italy, so she really knows her pasta!  She has graciously shared her recipe here:

Jeanette's Sun-dried Tomato Pesto & Spinach Pasta
Pesto:  Toss some garlic in olive oil and roast in oven at 350 until nicely browned. Process sun-dried tomatoes with fresh basil, grated parmesan, squeeze of lemon, roasted garlic and olive oil until everything is finely chopped and paste-like.
Pasta:  Cook one package of fresh linguine or fettuccine according to directions. In the last 30 - 60 seconds of cooking add several handfuls of fresh spinach to boiling water until just wilted. Drain completely.

Toss pasta and spinach with pesto and top with soft, ripe goat cheese.

Generally I like olive oil-based pasta dishes tossed with a combination of ingredients including fresh pasta, a green vegetable and topped with some kind of cheese such as: 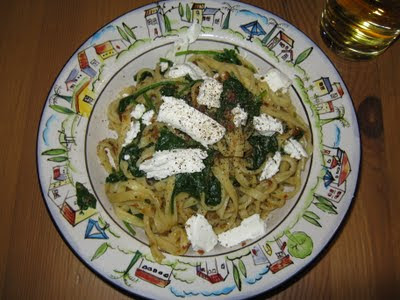 In the evening we saw the Spanish movie, Biutiful, which was horribly sad and surprisingly long. Of course every night that I was there we stayed up late talking; phone calls and emails are cheap substitutions for face-to-face conversation.

Monday was my last day in Vancouver before flying out in the evening, so I spent about 4 hours walking around the downtown sightseeing on my own.  I did some window shopping down Robson, Granville and Water, had coffee in Gastown, and ducked into a crepery during a particularly big downpour to enjoy a crepe before setting off for the airport.  There are some great home decor/furniture stores on Water St., such as Nood and Parliament.   I bought the girls some candy, and three small Bill Reid prints to frame and put up in the family room, but other than that I resisted doing any serious shopping.  I just can't handle the tax in B.C.! 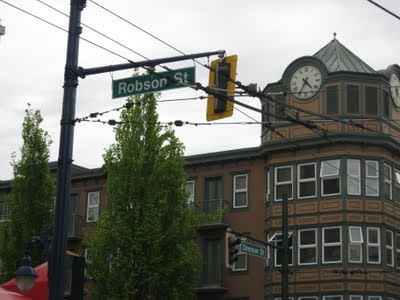