We are very fortunate here in Canada that our banking and mortgage regulations saved us from the worst of the economic problems that have plagued the US since 2008.  But the very nature of our global economy has made us all vulnerable in some way to what has happened, even if it didn't originate in our country.  I'm not sure if it's actually going to get better, and if it does, it's going to take a long time.  I think that people in Canada are sitting tight, waiting to see what happens.  Too much of our market relies on the society of consumers that lies south of the border.

Over the last couple of years I've read/watched a lot of horrific stories about people losing their jobs, homes, savings and ending up with nothing and living on the streets.  One of the worst hit areas of the United States is Detroit.  I had read that at one point last year, their unemployment rate was at 25%.  Thankfully it has dropped to 13.5%, which is still insanely high.  Our unemployment rate in Alberta currently sits at 7.8%.  One big difference is that Canadians have better access to employment insurance, so our safety net protects us from the worst happening here.  But really, there but for the grace of God go I. 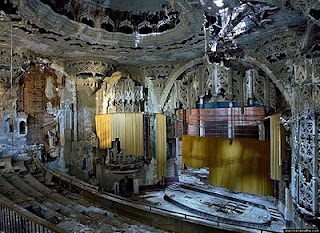 Here is a collection of pictures of Detroit, and what is happening to buildings in that city.  And not just any buildings, landmarks.  I don't know that I've ever seen historic buildings allowed to deteriorate this badly.  The Bank of America is also planning on demolishing 100 abandoned houses to help stabilize the market.  That will only make a small dent in the 90,000 abandoned homes in that city.  One of the biggest contributors to the decline of Detroit was the collapse of the auto industry.  Who knows what will happen with that whole sector.  We're doing our part by driving two Chryslers!  Here's a great commercial with Eminem advertising the new Chrysler 200 and showcasing Detroit.

Email ThisBlogThis!Share to TwitterShare to FacebookShare to Pinterest
Labels: Random things that I find interesting