Marcel the Shell with Shoes On and Last Night's Supper

I'm sure that many of you have already seen this, but it is sooo cute, I had to share it!

It really reminds me of this classic from Sesame Street:
Last night I made a family favourite for supper.  It's one of those meals that Mike doesn't seem enthusiastic about when I tell him that I'm making it, but once he eats it he is very complimentary.  I got the original recipe from my first-year college roommate, but have made a few small changes to accommodate my tastes and Mike's pickiness.
Chicken Stroganoff
2 Tbsp canola or olive oil
3 chicken breasts cut into uniform cubes
1 cup chopped onion OR 2 Tbsp. minced dried onion.  I use the minced dried onion because Mike thinks that he hates onions and the dried is unrecognizable in the finished meal.  It's a good trick to use with onion haters in any recipe.  Onion adds such a good flavour that you don't want to exempt it from the recipe.

2-3 cups sliced or quartered fresh mushrooms.   I prefer to use brown mushrooms as they have a stronger flavour.  Hmm, umami!
2 Tbsp flour
1/4 tsp. pepper
1/2 tsp. paprika
1 Tbsp. parsley flakes
1 Tbsp. beef bouillon powder.  MSG free preferably, which is available at Nutter's.
1/4 cup of water
1-1.5 cups of sour cream
﻿
Saute the chicken and onions in the oil in a hot pan.  Add the mushrooms and cook down a little.  Mix in the next 6 ingredients and stir until it's simmering and thickened.  Add sour cream and heat without boiling.  Serve over hot egg noodles and a vegetable side. 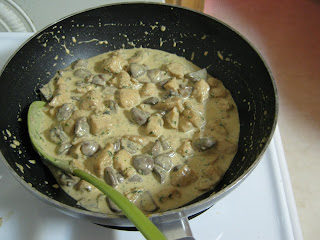 Posted by Alison Wonderland at 9:41 AM

Email ThisBlogThis!Share to TwitterShare to FacebookShare to Pinterest
Labels: Random things that I find interesting, Recipes